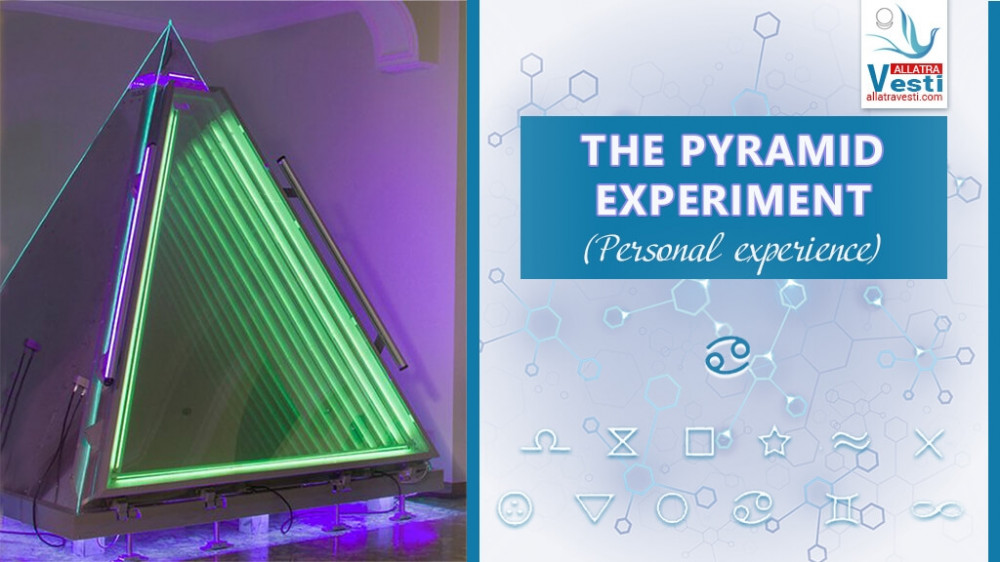 Greetings! For writing this article, I was inspired by the only desire — to share my experience with people. When after the PYRAMID experiment I talked to my friends, guys shared that they didn’t quite understand what they had been supposed to do. Therefore, many of them had sat down to perform spiritual practice, although the work of consciousness had been activated here. Even taking into account that the letter with symbols had clearly and precisely explained how to receive the symbol. However, consciousness never slumbers as it turned out, and it complicated everything again, and some of my friends later on thought that something was wrong with them, although in actual fact they had simply given way to lies from the system that one needed to try VERY hard in order to see it (the symbol).

While actually, as it was explained, one should have calmed down and just LET the symbol reveal itself.

Thus, I’ll be happy if my experience will prove useful to somebody. All the more, the second Pyramid experiment is approaching, which will take place on September 29th, and I’ll participate in it as well.

Let’s go back to the experiment itself. First of all, 15 minutes before the beginning of the experiment I performed a relaxation exercise. I had learned to relax owing to J. Schultz’s autogenic training method mentioned by I.M. Danilov in the Alive Conversation CONSCIOUSNESS AND PERSONALITY. FROM THE INEVITABLY DEAD TO THE ETERNALLY ALIVE:

“Igor Mikhailovich: ...But the approach should be serious, like to an instrument. And afterwards already, there will be spiritual practices. This is not such a difficult path, and it doesn’t take too much time if you work hard and really strive for it. But there is also a little problem in the fact that people don’t want to do this. Consciousness hinders them. They will not even do the autogenic training properly, but they will talk and wish.”

“Igor Mikhailovich: We talked about the stages for a person who feels an inner need, but cannot cope with his consciousness and the like. What is needed? From time immemorial, there was a well-developed formula: in modern terms, it is autogenic training, meditation, and spiritual practice. Before, the autogenic training was called differently. There was a lot of fiction made up by people in it. But thanks to Schultz who eliminated all the made-up philosophy, all the metaphysics that was previously given to common autogenic training... He eliminated it and derived an ordinary formula for self-suggestion, and that's it. That is, the work on one’s body by means of one’s consciousness. But this was just the first basic step.”

I’d like to note that consciousness was uneasy. Therefore, I calmed thoughts and breathing, and relaxed my body. When the experiment began, consciousness commented with fear — Oh, what will happen now? How will it be?

But what I also clearly understood was that fear – it’s not me, that I just needed to pass through it, meaning, to take attention away from there and to be in the state of Love (which is a continuous state) and acceptance. I also understood that I just needed to receive the symbol. For 10 minutes after the experiment beginning there was exactly this state, plus pictures from consciousness and some fragmented thoughts. Nevertheless, I managed to preserve tranquility. Then, there was as if expansion, and the AllatRa sign appeared voluminously. And thereafter simply, without any efforts on my part, the transmitted symbol (as later on was confirmed) revealed itself. By the way, the symbol appeared rotating clockwise, which was also interesting to observe (that is, not the symbol itself was rotating, but the symbol was as if attached to a clock hand which started to move in a circle, something like that).

What else can I say? That in olden times people were able to communicate at a distance, and nowadays many can do so — it’s obvious. That there is a unified information field. That all of us really influence each other and the world around on the whole, and that it is very important to feel Love and Gratitude.

We should choose good, pure thoughts — learn to control our thoughts, establish our own inner “customs office” — not to admit and all the more not to spread negative news, gossips, judgements regarding other people or situations.

But we should also note and don’t forget what I.M. Danilov said in the programme CONSCIOUSNESS AND PERSONALITY. FROM THE INEVITABLY DEAD TO THE ETERNALLY ALIVE:

“Igor Mikhailovich: Any work with a thought is just a fuss in the sandbox, in the three-dimensional material sandbox. Whether you think about good or whether you think about bad – you just think, you don’t cognize what lies deeper. I would give one more comparison: you’ve come to a lake, and you are admiring its smooth surface. Have you cognized this lake, its depth, its waters? Until you dive in, you won't know. And to know what's in these waters, you need to dive in. Whereas to look at the water and talk about what's floating on its surface, it's possible, of course, but you won’t know what this lake is in reality. Something like that.”

AS FIRE DOESN’T MERGE WITH WATER, SO THE SPIRITUAL WORLD CANNOT BE PERCEIVED BY CONSCIOUSNESS

To love is a natural state for a human being, it is inherent in all of us initially, and it’s the only thing which truly makes a Human Alive. This is true Life.

In three-dimensionality, in this material world, in society, since childhood we were taught that we must achieve something, insist, step over others, nearly snatch something out of someone’s hands, have certain connections, preferably closer to the "top" (forming a pattern of "authorities") in order to achieve the desired. Therefore, a modern person who follows the spiritual path simply doesn’t believe that there can SIMPLY BE something good, such as God, Love, Spiritual World, that one just needs to shift the power of attention to that living and real instead of stubbornly breaking through the open door and “knocking loudly at the threshold” as it is said in Ibn al-Farid's "Great Qasida" in translation by Z. Mirkina:

"Oh, if, having confused all your ways,

You'd be lost to find me,

Forever and instantly take leave of all the vanity,

All complexity would become a clear simplicity,

And you wouldn’t be knocking loudly at the threshold,

But right into the house you could quietly enter.

But you’re not entering, you’re standing outside,

You haven’t settled, you don’t live in me.”

Right from here, from these patterns of behaviour in three-dimensionality, such behaviour is accordingly transferred to the Spiritual World.

Therefore, in order to learn to accept, to embrace God’s Love, one needs here, in three-dimensionality, as it is said in the books by A. Novykh, and as I also understand it, to become a Human who lives by Honour and Conscience, to become Alive. For as long as there is a chance, by every moment, by your deeds, by pure thoughts, by your life, you should prove to God that you are a Human.

“Honour is, in fact, one of the attributes of general spirituality of a human being, not just of a warrior, meaning when he lives by some high moral values. A human without honour is nobody and nothing.”

Sensei of Shambala. Book I by A. Novykh

“Yes, this is a real feat – to be in the system and still remain a Human Being.”

from the book AllatRa by A. Novykh

“Conscience is a category of Personality.”

from the programme FROM AN ATHEIST TO HOLINESS

One more important understanding needs to be mentioned — that three-dimensionality, this material world, with the animal mind system, with these patterns and pictures, thoughts and emotions, are precisely ideal conditions for the formation of an Angel, as it was explained by I.M. Danilov in the programme FROM AN ATHEIST TO HOLINESS. In order for a person to make choice. Yet, how can it be otherwise?

That is, one should learn to understand, to distinguish these tricks from the system, and begin to use one’s consciousness as an instrument, so that it would start working for the Personality.

“Igor Mikhailovich: Is it possible for a person to enter the Spiritual World by means of consciousness? It is impossible. But information, even that same Knowledge, it is spread, in the first place, in three-dimensionality. And when a person feels that it is true, he begins to study and become free with the help of that same consciousness. And here consciousness works as a kind of intermediary which destroys itself.”

From the programme: CONSCIOUSNESS AND PERSONALITY. FROM THE INEVITABLY DEAD TO THE ETERNALLY ALIVE

So, I’ve liked the experiment. It is interesting. First and foremost, for cognition of oneself. And let me emphasize once again that this is the work of consciousness, when you as a Personality are using this tool.

The most important thing is not to complicate anything. Simply calm down and just let it be, this very moment, right here and now... just Love.