Fresh outlook on unexpectedly rapid expansion of the Universe

American astronomers’ researches confirm the information from the books by Anastasia Novykh. The rate of the universe expansion turned out to be much higher than previous calculations showed. Scientists come to a conclusion that this fact may indicate the presence of some dark radiation or the relativity theory incompleteness. The researchers’ article is accepted for publication in the Astrophysical Journal.

An American astrophysicist and Nobel Prize winner Adam Riess notes that this discovery can help to understand what dark matter is as well as dark energy and dark radiation. It is considered to be quite important, since according to modern scientists’ estimates, various combinations of dark matter make up more than 95% of the total mass of the universe.

Previously, to measure the rate of the universe expansion distant supernovas were studied and data from WMAP and Planck probes were used, by which scientists study the microwave "echo" of the Big Bang. In their new research, astrophysics decided to change tactics and began to observe relatively close, variable stars of neighboring galaxies. These stars are called Cepheids. They are of interest to researchers as their pulsation can be used to accurately calculate the distances to distant space objects. With the telescope "Hubble", Adam Riess’s group observed such stars in 18 neighboring galaxies, where supernovas explosions of the first type had recently occurred. As a result of the studies, the scientists managed to calculate the distance to these objects, which helped to specify the value of the Hubble constant and reduce the error in its calculation from 3% to 2.4%. As a result it turned out that two galaxies which are at a distance of 3 million light-years from each other, fly away at the speed of 73 kilometers per second. Thus, the unexpected result was obtained: the speed was considerably higher than in the calculations, made with the help of WMAP and Planck. This speed value can not be explained by the existing scientific views on the mechanism of the origin of the universe and the nature of dark energy. 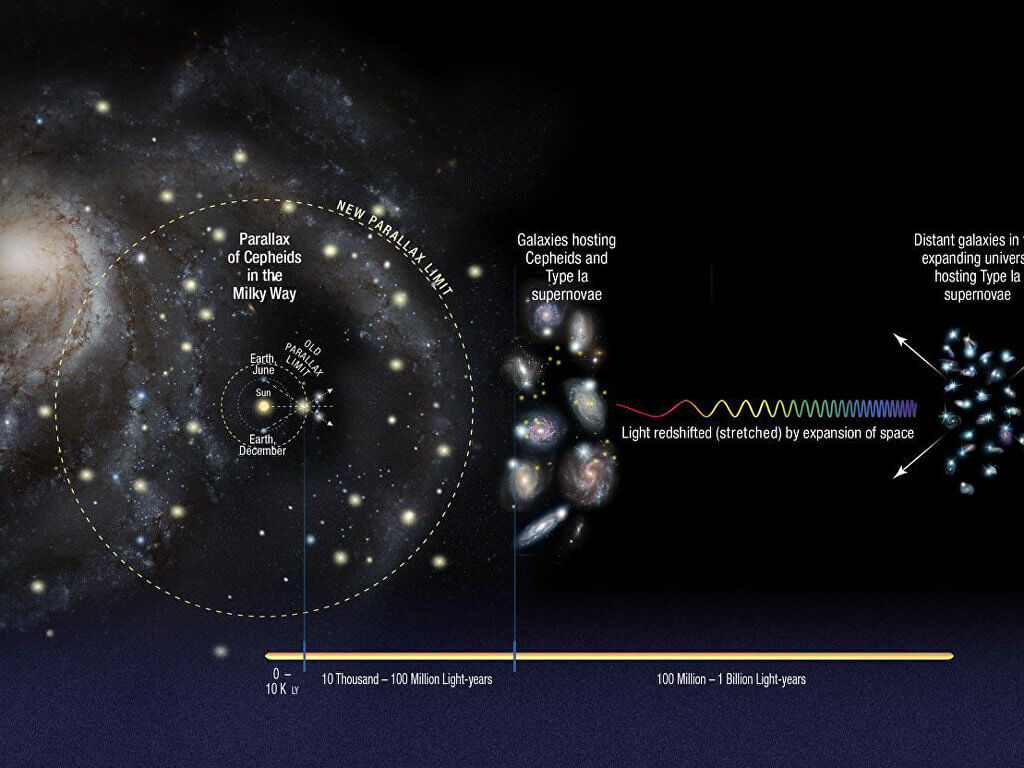 Adam Riess suggests that such a high rate of the universe expansion may indicate that another invisible substance is involved in the "acceleration" process, in addition to dark energy. The scientist called it "dark radiation". According to the researchers’ opinion, this "radiation" is similar to the so-called sterile neutrinos in its properties, and it existed in the early days of the universe, when energy was dominating, but not matter. Scientists believe that further researches with the help of "Hubble"telescope and improvement in observation accuracy will help to understand if "dark radiation" is really needed to explain unexpected results of the researches on the rate of the universe expansion.

The fact that the universe is not static, but gradually expands, was proved by the astronomer Edwin Hubble in 1929. He made his discovery when watching the motion of the distant galaxies. At the end of the 1990s, while exploring the supernovas of the first type, astrophysicists managed to find out that the universe did not expand at a constant speed, but with acceleration. Then, it was concluded that the reason for that was the dark energy.

It is interesting that the results of current research in the field of astronomy often confirm the information from ancient legends of many peoples of the world. These cultural artefacts keep a remarkable information about the origin of the Universe through the Primordial Sound (which is still seen as a background of certain radiations), as well as knowledge of the world order. Suffice it to recall the well-known cosmogonic myths of the Dogon and Bambara. It became possible to partly understand the information kept by this nation due to the discoveries in astronomy. But the myths of the Dogon contain such information that the level of modern physics development is not able to give it a scientific explanation.

Returning to the issue of the universe expansion, it is worth noting that the results of new research confirm what was published many years ago in the books by Anastasia Novykh, moreover, this discovery is only a small part of the knowledge set forth in these books. For example, in the books "Sensei of Shambala. Book IV" and "AllatRa" it is written that the motion of the universe is spiral. In general, the spiral course of movement is a promising trend to explore; it appears in all the processes of the material world. But the most interesting is that in her books the writer describes not only the process of the origin of the universe, but also provides information about what is happening and will happen as a result of its expansion. Furthermore, the books contain valuable knowledge about the power that lies at the heart of matter and all its interactions, analysis of modern scientific views in the study of astronomical phenomena, analysis of ancient legends from around the world and many other things that can become the impetus for epoch-making discoveries in modern science.

For example, in the book "AllatRa" quite an interesting information on the total mass of the Universe is written:

Rigden: ...The amount of matter (its volume, density and so on) as well as the very fact of its presence in the Universe does not affect the total mass of the Universe. People are used to perceiving matter with inherent mass solely from the perspective of three-dimensional space. However, in order to have a deeper understanding of the subject, it is necessary to know about the multidimensionality of the Universe. Volume, density and other characteristics of the visible matter, with which people are familiar, in all their diversity (including the so-called “elementary”particles) change already in the fifth dimension. Yet, mass remains unchanged, since it is a part of the general information about “life” of this matter up to the sixth dimension inclusive. The mass of matter is just information about interaction of one matter with another under certain conditions. Like I have already said, ordered information creates matter and sets its properties, including mass, too. Given the multidimensionality of the material Universe, its mass always equals zero. The total mass of matter in the Universe will be enormous only for Observers from the third, fourth and fifth dimensions…

Anastasia: Does the mass of the Universe equal zero? But this shows the illusory nature of the world as such, which was mentioned in many ancient legends of peoples of the world…

Rigden: Science of the future, if it chooses the way indicated in your books, will be able to come close to answering the questions of the origin of the Universe and of its artificial creation.

According to the existing views in science, "if the accelerating expansion of the universe goes on indefinitely, the result will be that galaxies beyond our Supercluster will sooner or later come out of the event horizon and become invisible to us since their relative speed will exceed the speed of light."

There is another view on the process of the universe expansion, which can be traced in the myths of the peoples of the world, where it was said about the reduction of days and the Primordial Sound . In the book "Sensei of Shambala. Book IV" you can read the following:

- …In the nearest future, the mankind will face another phenomenon of the Universe. Due to the increasing acceleration of the Universe and exhaustion of the power of Allat, the mankind will experience a rapid time reduction. This phenomenon will be that conventional twenty four hours per day will remain as they were but the time will pass much faster. And people will feel this rapid time reduction both on physical and intuitive levels of perception.”
- “Will it be connected exactly with the expansion of the Universe?” – specified Nikolai Andreevich.
- “Yes. It will be connected with the increasing acceleration. The more the Universe expands, the faster time passes and it will be like that till the complete annihilation of matter.”

The report "Primordial AllatRa Physics" has been recently published due to the scientists who are interested in the knowledge from the books by Anastasia Novykh and have started to thoroughly investigate the matter . As it is written in the report, the knowledge for scientific research was mainly set forth by the author in the books "AllatRa" and "Ezoosmos". In the scientists’ report, the information from the author’s books is supplemented by new data. In particular, there appeared such things as ezoosmic grid, septon field, septon, which are fundamental for the understanding of the processes occurring in the world at both the micro- and macro-level.

“At the core of the material Universe, there is a specific “spatial frame”, non-material structure – the Ezoosmic Grid. Any resident of the three-dimensional world would perceive this energy “structure” as a very flattened object, in appearance similar to a flat brick, with a side height of 1/72 of the size of its base. In other words, the ezoosmic grid has a flat geometry. The ability of the material Universe to expand is limited by the size of the ezoosmic grid.

Within the ezoosmic grid, there are 72 dimensions (Note: for more information please refer to the book “AllatRa”). Еverything that is called by modern science as “the material Universe” exists only within the first 6 dimensions and the last 66 as a matter of fact are controlling superstructures which restrain “the material world” within a certain constraining framework – six dimensions. According to the ancient knowledge, 66 dimensions (from the 7th through the 72nd included) also belong to the material world, but they are not material in their essence.
Outside the ezoosmic grid, as it was stated in ancient sacred legends of various nations of the world, there is the spiritual world – a qualitatively different world, which has nothing in common with the material world, its laws and problems.”

From the report "Primordial Allatra Physics"
Read more about the ezoosmic grid structure in the online version of the report.

The books by Anastasia Novykh and the reports by the international group of scientists “Allatra Science” are of interest to a comprehensive study, they enrich modern science, directing it to epoch-making discoveries and qualitative changes in terms of development of our civilization. And as always, the human pride remains as the main stumbling block. Are you ready to accept this knowledge, without hanging different labels from the ego and really be curious like children?

Anyway, the thing to remember is that "the true science is the process of cognizing the truth, rather than a means to achieve power." 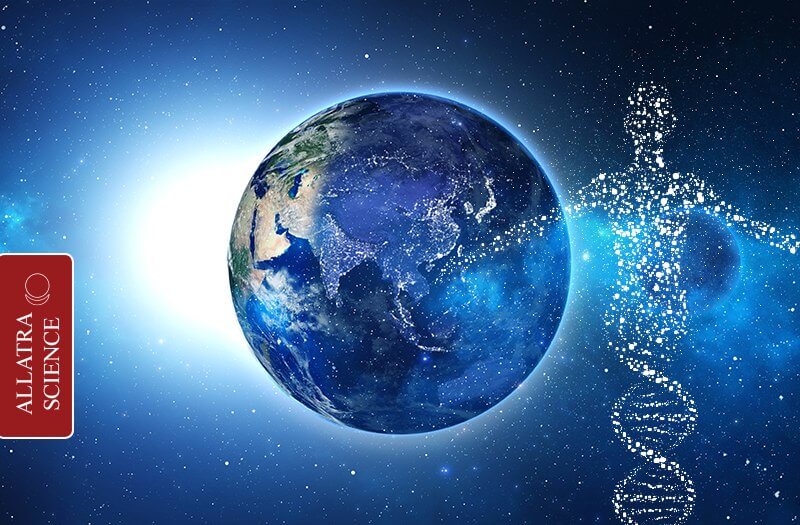 The publication of research "A 2.4% Determination of the Local Value of the Hubble Constant"
Used photos of NASA, quotes from the books of Anastasia Novykh. 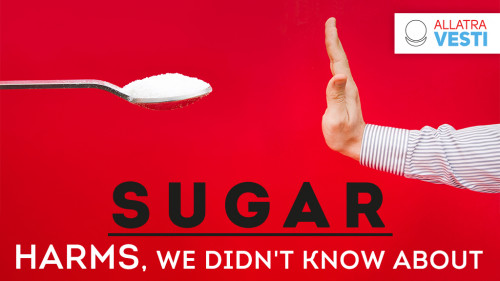 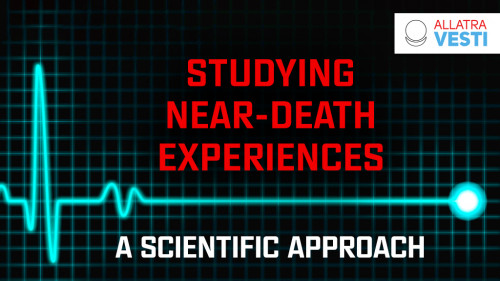 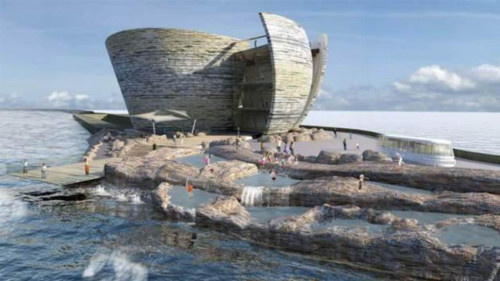 How does the Foggy Albion use the...
Ваш комментарий отправлен на модерацию!
Comments (7)