Why do quarrels occur? 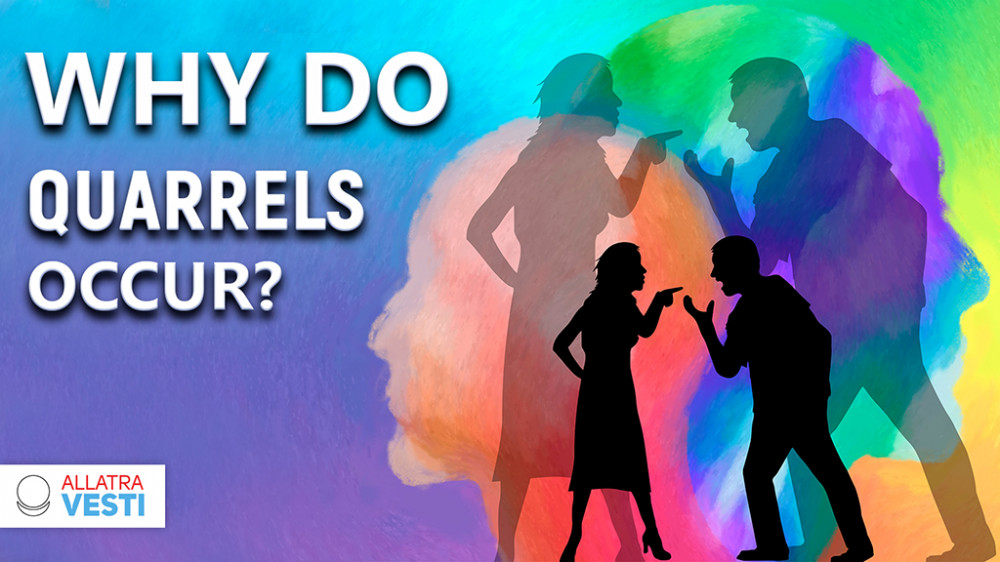 Friends, I became a witness of the system scheme work, how it makes people argue with each other and separate them. From seeing the full picture of how the system is working, I was very excited and the feeled with a sense  of purity. As always I have got the proof about what I read in Anastasiya Novykh’s books and heard in the programs with participation of I. M. Danilov. Before I was just listening to this, and I thought I understood everything. However, I didn't do it in practice.

A week ago I started noticing that I began to have thoughts of criticism towards my friend. I was observing it, and also thought: “why did it start”?

A week later the following situation happened. We, as a group, planned a meeting, and during the day guys were reminding us a few times about it. I joined the meeting, and I’m seeing that my friend is not here, and I thought probably he is busy. After some time I see a message from my friend. He wrote to me during the meeting that he just forgot. Seems like a usual situation. However, consciousness continues its run.

In the evening we were talking with my friend and he said: “you know, I started receiving such thoughts “how could you not to remind me about the meeting, I always was reminding you and backing you up”. But I pushed out such thoughts and did not pay any attention to it”. I explained to my friend that I just did not think about it, because we have received reminders three times during the day.

In that moment of a truthful conversation with a friend I saw the schema of consciousness work: the thoughts were sent to both of us. And even if one of us puts attention into the thoughts from the consciousness, into the criticism, the judgement, and, as a result, the tension of the energetic level starts to rise up which even feels on the physical level. And naturally it affects the other person since we are all connected on the informational field. And when we think about the other person then the connection happens on the level of the essences. That is how it happens. If only one person disconnects this chain, and does not get involved in the game of consciousness, then it becomes easier for the other person to separate himself from such thoughts. 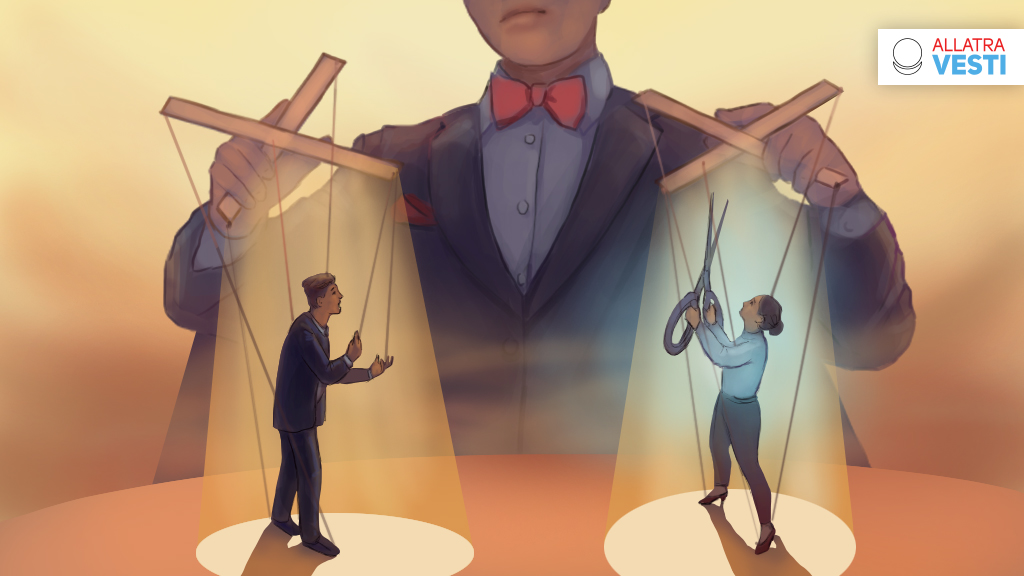 Why the thoughts of blame happening towards friends?

I would like to mention one more important point.

The friendship, as well as anything else in this world is dual. It gives you the feeling of unity, it increases in multiple times the potential in joint affairs. This is a threat for the system and that is why it will try not to give the opportunity for friends to turn the full potential against the system itself. The system will be doing anything in order to take this energy for itself. It turns on “my friend” pattern – since this is my friend which means he owes me. However, we know that no-one owes anything to anyone, and any person, even our friends, have their own freedom of choice, and they have to decide how to live and how to act.

The problem starts as soon as we skip the moment about human freedom of choice and to own a friend just like a property. The  friends quickly started being the enemies. Because, you see, they just simply have their freedom of choice!!! This is Absurd! But not from the point of view of the system. The system is all about the power over someone, and it is not important if this is a friend or not. The manipulation between friends can happen even more often since they are closer to each other. And a good example of such manipulation is if you will ask or propose to some of your friends to do things that are not so good, almost nobody will say “no” just because friendship could be ruined. And not everyone is ready to change the comfort of three-dimensional conditions for the truth just because it involves some inconvenience. But where are the inconveniences? In the mind, first of all.

Let’s discuss the insults. Where do they happen more often? Between friends and family. Why? It’s all the same, because we think this person belongs to me, he is my friend or my wife, or my husband, that's why he should do everything that I like, otherwise – resentment! Just as the system has “placed guards” inside a human so that the “unclean” can not get to the infinite source of his Soul's energy. In order to unite and consolidate efforts for the implementation of good deeds and world unification, people need to get rid of the desire to control each other, especially those who are in relationship and friends, otherwise this dragon will devour everyone, without allowing common unity to take place.

Using this simple example I finally understood how important to keep my mind clear, because if I allow the "crap" from the consciousness, I could lose something very important and pure, that was created by hard work and not only by my affords, but affords of the Spiritual world. And by your own foolishness you can waste your "gifts" – as I call help and experience from the Spiritual World – and also lose relations with people close to you, and this has consequences not only for personal relations, but also for the things that people do together. If we, the participants of  ALLATRA IPM, will have these thoughts and get involved in this game – how much our productivity from interaction drops. This is typical work of a system when we don't have clarity in our actions, the part of our attention goes to something entirely different than to think how to do as much as possible and more effectively. We strengthen our enemy.

I understand I did not write anything new. But I was so struck by what happened, by how simple it was, by the consequences of thinking that way, that I decided to share it with you.

Thoughts come to two people at the same time.

If at least one person interrupts this chain, the other person will not be stressed and will find it easier to cope with these thoughts.

By denouncing how the system works, friends will easily share this with each other if necessary. And there will be clarity between them. I love that word very much. It is now my favorite feeling – inner purity, it is worth treasuring.

If the above does not happen, the result you all know from your own personal experience. And in that case, you feel an inner tension, a consciousness pressing in. And also, even if you are not involved in the situation, but are present during a not pleasant conversation between two people, you can feel this tension, even physically it's so uncomfortable that you do not want to be present here at that moment.

Eventually, I asked myself the question, why do I feel uncomfortable with conflicts and quarrels? At first glance, everything makes sense. But after understanding the situation better, I realized that it was not about conflicts and people, but, as always, about me, or rather, this is about the work of my consciousness. Why did the conflict situation drag me in and make me feel bad, even though I was not personally involved in it? The answer is obvious. Because I was distracted from communicating with God, and my attention was transferred to the conflict. Where our attention is concentrated, there we will be. One of the cases of separation from God is if we would grade other people and not accept their right to choose.

Spiritual development implies that a person, being one with God, cannot feel unpleasant even being in hell – that's the point! What is conflict? First of all it is the choice of those who are involved in it, consciously or not. And when I don't accept people's choice and still evaluate them from the position that I am better and more spiritual than they are, then I, being already separated from God, become a part of the system, which simply "sticks" me to this conflict as another additional source of attention. After all, it is so convenient when two people quarrel in public, and everyone feels bad, and everyone invests their attention into the system. But it is not the fault of those who initiated the quarrel, they have already paid for it, they have given their lives to the system, but those who are more interested in evaluating others and violating the right to choose than in communicating with God.

So who is to blame? The answer is our laziness, our unwillingness to understand the work of consciousness and discipline it. After all, the desire to control and dominate our loved ones comes solely from consciousness. Spiritual friendship and Love implies giving what is most precious to another person – freedom of choice and acceptance of everything without offense. Ahead of the logic of consciousness, it is important to say, a person who works on himself will not do something negative, otherwise what is the point of working on himself? And even if he does, it is his choice.

And one more thing. Before this whole story, I was watching a program with participation of Igor Mikhailovich Danilov, "The Spiritual Path: Philosophy and Reality”, and somehow a fragment was highlighted:

- Excuse me, but where is simply “walk out and go”?

- You should just stop sitting in this theatre of actors’ performances on the stage, where instead of actors, your consciousness forces you to take, let’s say, the position of either one or another actor.

- Instead of listening to fairy tales and burning your life, listening to the tales and ravings of these actors, you can simply stand up. You just stand up right now and walk out in the literal sense of the word, and even slam the door, onto the wide road and, without turning anywhere, go home. Is this difficult?

IM: But what do you need to do?

Zh: Not to listen to consciousness.

IM: There must be action.

IM: And here is the stumbling block, because there must be action. But as long as the person listens to actors philosophizing among themselves what spiritual path to choose for you, and a person doesn’t know at all that consciousness isn’t his, and their function is precisely not to let you go because it is exactly that very demon which is mentioned in your religions, my friends. That’s what consciousness is.

And I noticed that now I clearly understand what it's all about, while before, when I listened to them, there was no completeness. And, as it turns out, with this situation that happened with my friend, this fragment was a guiding star. And it resolved just like that: “walk out and go”.

Good luck to all of us!

Alyona, participant of the ALLATRA IPM