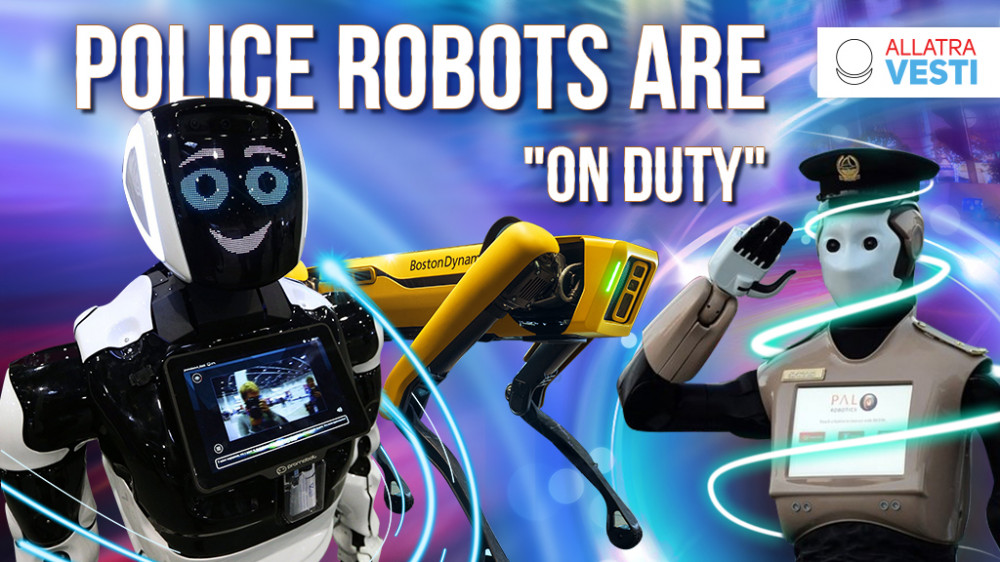 Today's world is rapidly filled with advanced technologies in various fields. Thanks to this our lives become easier in different ways. We don't have to do time-consuming or life-threatening work. Robots can do it for us. But are we changing too? As it was said at the conference “Global crisis. This already affects everyone", we are trying to humanize artificial intelligence, while we are forgetting what humanity is.

Today, robotization and automation is taking place in many areas of human life. In previous articles, we looked at robotic storekeepers, robotic waiters, and today we will talk about such a popular profession as a policeman. This is a valiant profession, these are people who, day and night, stand guard over peace and order in society. But can a person be more effective: not get tired, not be lazy, honestly serve and, most importantly, be invulnerable from the outside and in their thoughts? Let's take a look at some examples of police robots that are already "working" in precincts.

The Spanish company PAL Robotics has developed the humanoid police robot REEM. In May 2017, it started the service in Dubai.

The humanoid robot is equipped with a touch screen on the chest, two arms, wheels, and cameras that transmit images in real time to the command center. His height is 1.67 meters. It has a face recognition function, however the recognition accuracy is 80%.

The robot is designed to patrol tourist areas and shopping centers. He speaks 9 languages, which allows the robot to answer questions, accept fines, provide information and get statements from citizens about committing a crime. The next version is planned to be upgraded up to full police duties, but people do not trust robots with weapons yet. By 2030, in Dubai, they plan to open the first district where only robots will work, and also intend to replace a quarter of the real police officers with robots.

Another humanoid robot policeman, Promobot, also began to work at the central headquarters of the Dubai Police in the UAE. He can communicate so far only in English and Arabic. It is also intended for patrolling crowded places, can answer questions, advise, accept fines, control the security of the entrance to the headquarters. According to the developers, it is the only service robot that speaks Arabic.

Since September 2021, has started testing of a police robot named Xavier. It was developed by the Home Team Science and Technology Agency. This is a four-wheeled vehicle, which is equipped with a LSCS (loud speaking communication system) and a camera. During the testing period, the robot must keep order, make photo and video recording of offenses, and also inform citizens about the violation of the rules through the LSCS. For example, warnings are issued to drivers of scooters and motorcycles who ride on footpaths, people that smoke in non-designated areas, for illegal trade, violations of the norms of behavior during a pandemic. If the warnings are ignored, a group of police officers is sent to the scene, who will already have video evidence, a photo of the offender and a ready-made form for imposing a fine.

The police robot is pre-assigned a patrol route, and with the help of a video camera and other sensors, information is transmitted in real time to the control center.

This unit travels at a speed of 5 km / h. The battery lasts about 5 hours on a single charge. This test will take three weeks.

According to the Singapore Ministry of the Internal Affairs, the introduction of Xavier robots into the work of civil servants will reduce the number of people needed to patrol the city on foot, while increasing efficiency.

The AnBot robot was developed by the Defense Science and Technology University of the People's Liberation Army of China. According to the technical data of the robot, its height is 1 m 49 cm, and its weight is 78 kg. According to the university's statement, the robot is capable of reaching speeds up to 18 km / h, but in fact, the speed of movement in standby mode is 1 km/h. The patrol robot can work on a single charge for up to 8 hours and is equipped with a system for recognizing calls for help, while calling the emergency service.

In the future, they plan to introduce the function of recognizing explosives and other hazardous substances. This unit also provides telecontrol.

New York amazes with its dog-robots

Police robots patrol the streets of New York City. The Boston Dynamics company has developed the Digidog ("Digital Dog") robots, which more than once helped out police in critical situations. The robotic dog is equipped with a camera and flashlights, which allows the pilot to assess the situation in real time, even at night. The four-legged robot can also provide audio communication if needed to negotiate with a suspect. In the future, the New York City Police Department wants to acquire an updated version of the Digidog model with a manipulator arm.

As we can see from the above examples, this valiant profession has not been spared by the trend of robotization.

Robots show incredible results: they are stress-resistant, do not get tired, executive, invulnerable, always do accurate prescribed actions, do not lose their vigilance, respond to the signals for help, do not exceed their authority. They do not have a temptation to use their position for benefits. You can say it is a dream and not a policeman. However, there are still some flaws in these robots, although I am sure that this is a temporary thing.

On the one hand, this is a great opportunity to save and to rescue many human lives, and on the other hand, this technology brings inconvenience to society.

There are robots that can run over a person or a child simply because the motion sensor did not work or the subject did not enter the field of view, simply – the robot did not notice it. Sometimes, because of their unusual look, people get scared when they see patrol robots on the streets.

Let's imagine that in this profession a human has been completely replaced by robots. It immediately comes to mind that this is wonderful. Yes, but only we forget that we still live in a consumer society, where the main value is money and consumption. And imagine that those people who served – some of them may have given this profession almost their entire lives and now laid off. Simply because robots are more profitable. It's nothing personal, it's just business. Where will these people go, what will their families do? How will they provide life for themselves and their loved ones?

Unfortunately, we are not used to looking at the situation from all sides. The same thing happened with librarians with the advent of the global Internet. Now you can get any information without leaving your home. Libraries are out of fashion. Remember the last time you were in the library?

The digitalization of information also brings with it the threat of data distortion, substitution of facts, and alteration of human history. After all, it is easier to do this on a digital medium than in a book. Or another threat – a solar flare and all electronic information will cease to exist.

We trust artificial intelligence more and more. We are amused by the robots themselves, which seem cute to us. Several questions arise here:

After all, if today robots with AI were not entrusted with weapons and given the right to make decisions, this does not mean that this will not happen tomorrow. We all understand that in a consumer society such issues are resolved by a narrow circle of people at closed meetings, and we're just being confronted with a fact. This is partly our fault.

Another problem that must be considered: under the plausible goal of saving the lives of policemen, an army of robotic mercenaries is being created, which will faithfully serve their masters. And in the period of climatic disasters, who and from whom will these robots protect?

Technology and science must develop, but in a consumer society this does more harm than good to ordinary people.

We are introducing some kind of novelty only because we want to “hit the big jackpot”, attract the attention of other people and make money on it, and the more, the better. We do not think that because of our some cool idea on the other side of the planet someone has suffered.

Now let's imagine that our society is different. Let's call it the Creative Society, where the main value is the life of a Human. Imagine, that person loses his job and it threatens his well-being. Based on the first foundation (Human Life) and the third one (Human Security), a person is guaranteed protection in society. He has the main value – this is life, and no one has the right to threaten it. He is provided with free education, free medicine, housing and food.

You have to agree that sometimes there are such moments that you are tired, burned out, the profession is not interesting, you do not know what you want to do or whether there is such a desire to do something at all. And you have the opportunity not to work for a while. Not like we have now, to go on vacation for a month or even less. Go on vacation for an indefinite time, spend it on "thinking". It's great.

A creative society cannot exist with such conditions as it is now, where everyone is for himself. This is a society where a person not only enjoys all the privileges, but also takes responsibility for development and prosperity, by making a personal contribution to society as a whole. And when such a responsibility, together with enormous opportunities, will be with every citizen of the planet Earth, the world will change very quickly and become a wonderful home for Humanity.

As mentioned at the beginning of the article, it is in such a society that AI technologies can benefit all people and reach a new level of civilization.

What kind of society would you like to live in? 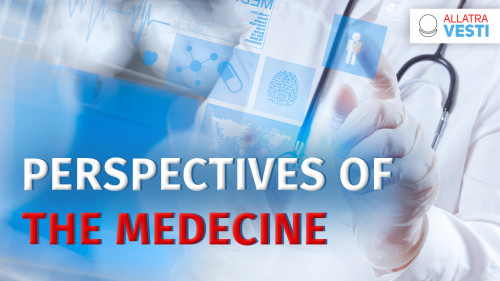 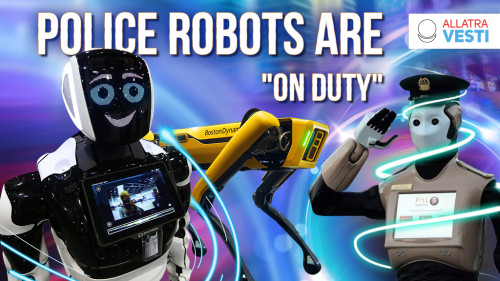 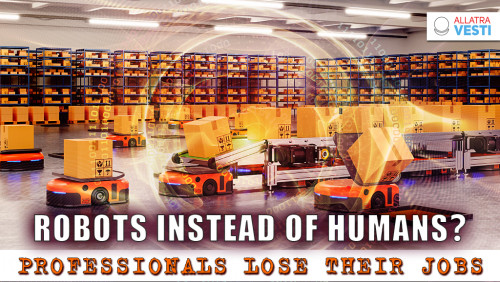 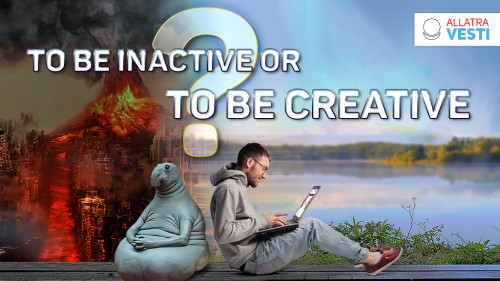 THE CHAIN ​​SHOULD NOT BE INTERRUPTED FOR...
Ваш комментарий отправлен на модерацию!
Comments (1)