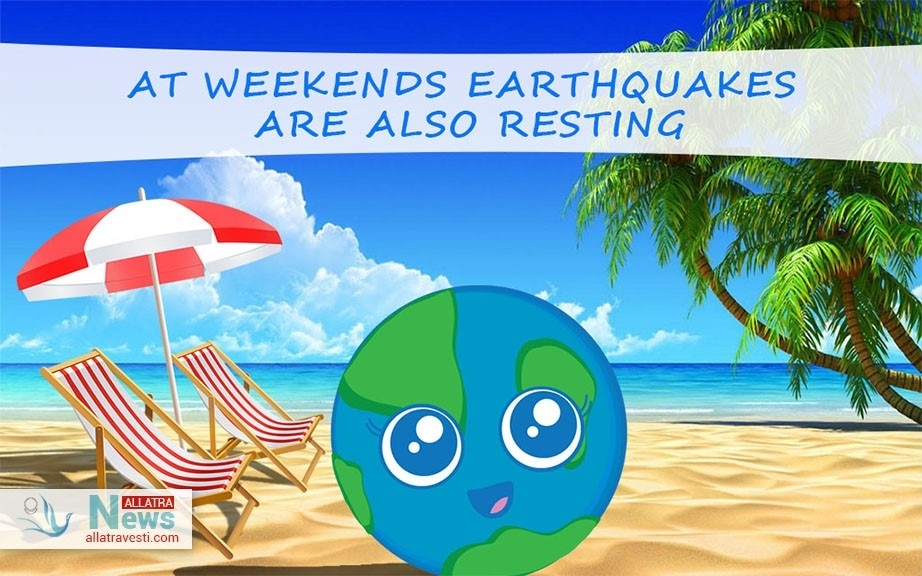 On March 22, 2017, the ALLATRA News website launched a project to collect data on all earthquakes on the planet Earth from all known and commonly available sources of monitoring of our earth's seismic activity (USGS Feed, EMSC Feed, GFZ Feed, RAS Feed, Natural Resources Canada, GeoScience Australia ) under the generalized title "SEISMOMONITORING".

The team "ALLATRA News" has revealed an unusual dependence of seismic activity on the days of the week. So, on weekdays the number of earthquakes is much higher in comparison with the weekends:

Below is a graph of the obtained data: 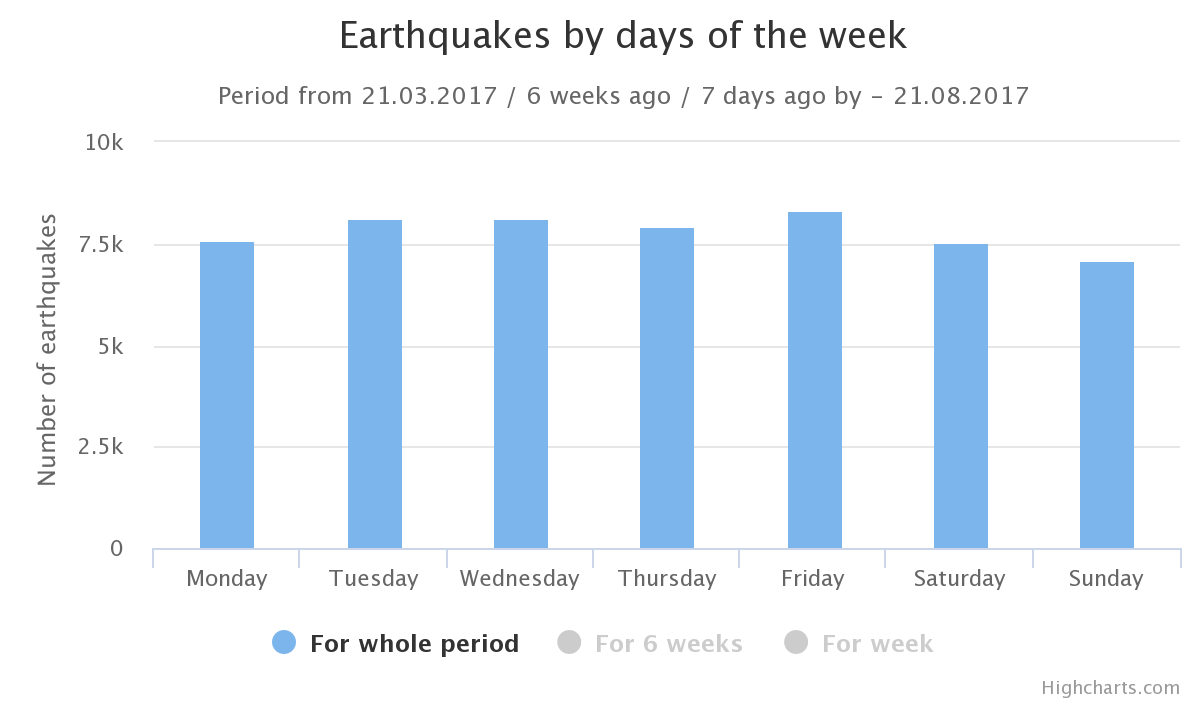 Here are the data received over the last six weeks. There is a similar tendency in them: 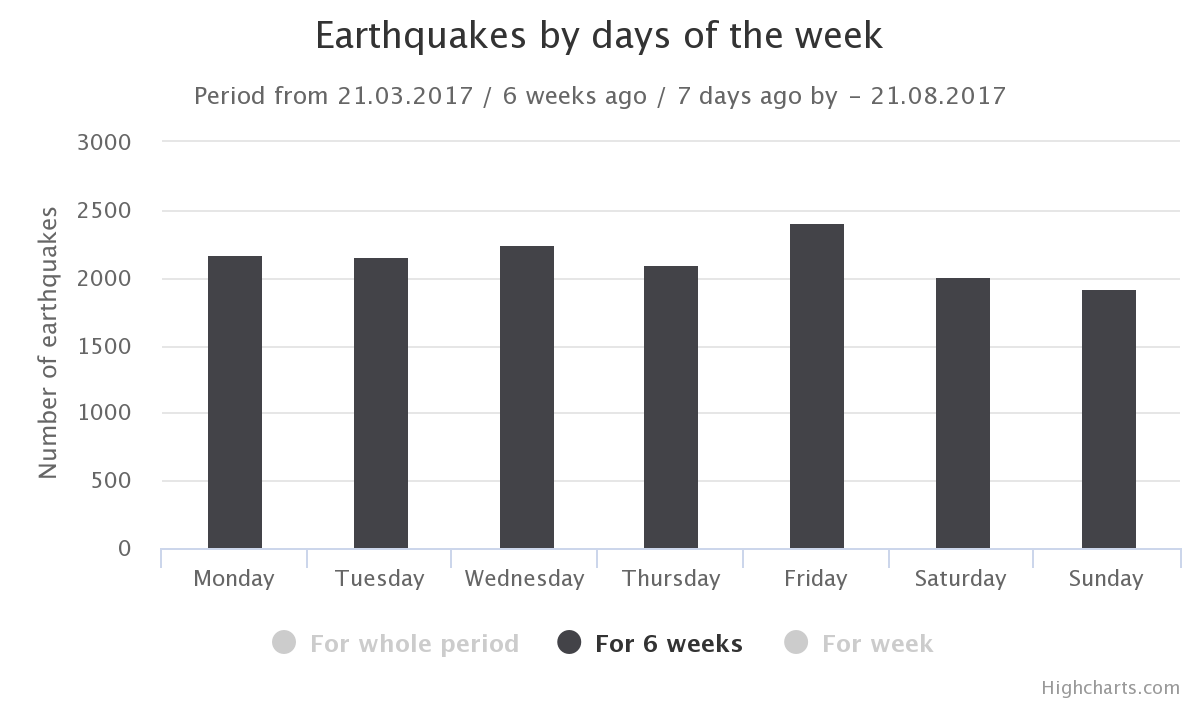 The data for the last seven days (Figure 3) slightly differ  from the general tendency. Peak load fell on Monday and Friday, and on Thursday there was a minimum number of earthquakes. Nevertheless, as before, from Saturday to Sunday there is a noticeable decline in seismic activity. 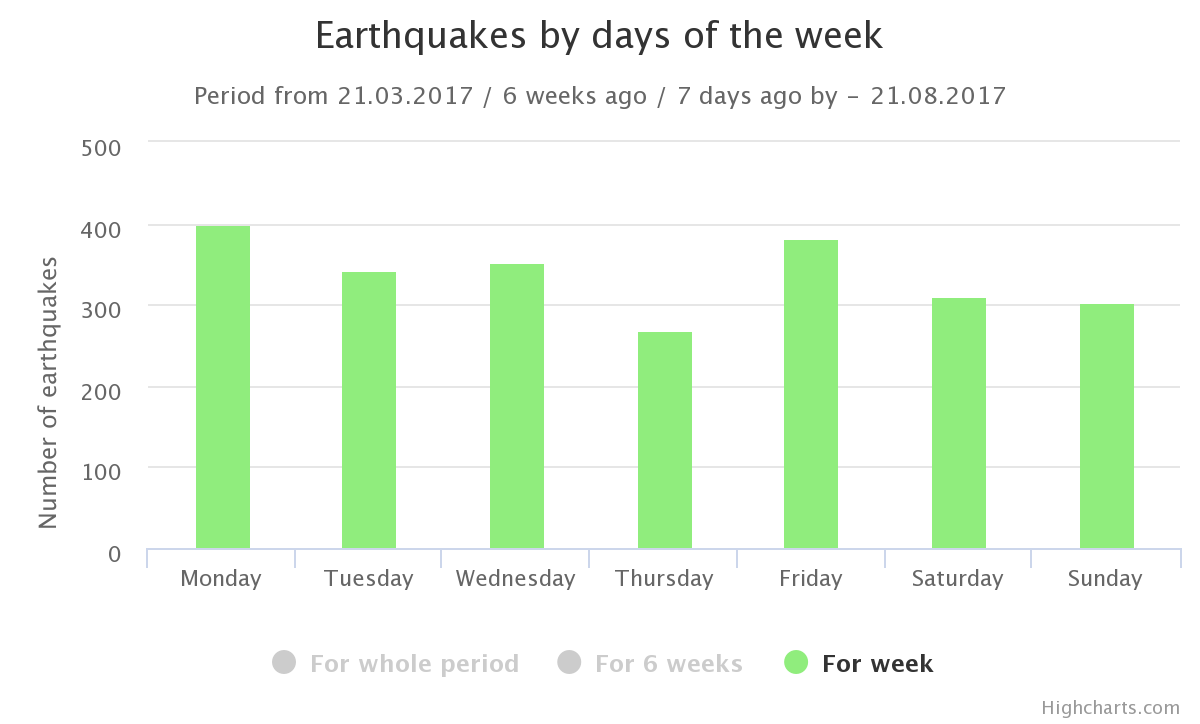 So, does this mean that there is some interdependence of the day of the week and the number of earthquakes in the world, and what would that mean? Thanks to the received data, we confirm the information obtained from The report “On the Problems and Consequences of Global Climate Change on Earth. Effective Ways to Solve These Problems” and "PRIMORDIAL ALLATRA PHYSICS", that the psycho-emotional background of the activity of all humankind has a direct impact on the climatic events on our planet Earth. This is explained quite simply - on weekdays the developed order in our society stimulates people to increase the degree of psycho-emotional activity right up to critical manifestations. A peculiar damping occurs on weekends when many people can at least relax a little, come to one’s senses and not think about the "daily bread." Thus, the cycle closes. Taking into account the fact that the population on the planet Earth is growing, the manifestation of seismic activity on the Earth, if the society as a whole does not change its priorities, will only increase, which inevitably can lead to an escalation of climate disasters!

What is the way out of this situation?

Everything is very simple. You need to start with yourself - to watch your thoughts and emotions, not to allow anything negative in yourself, but to cultivate the best spiritual and moral qualities, for example, such as friendship, love, mutual assistance. In this case, not only the personal life of the person working on himself will change for the better, but also the life, goals and priorities of the entire human community, and as a consequence, the earth's seismic activity will decrease, climatic phenomena will normalize, and even nature itself will not be as brutal as now.

Today's priority in the society is the struggle for survival and the race for material goods. A new, or rather, long-forgotten original model supposes to assume the spiritual and moral self-improvement of each person as a basis of the development of the society. As a result, everyone will get the survival not only of his body, because in a highly developed civilization there should not be such concepts as violence, murder, war, but, more importantly, the spiritual, what each of us intuitively strives for.

This does not mean that one does not have to keep up with the time and does not use all the benefits of civilization, after all, no one forbids all this, but due to correctly placed priorities, each person can reach a qualitatively new state within himself and become a truly free Personality. Such an internal change in an individual may be compared with the scientific term of a quantum transition, when a particle passes into a state of a wave, and when a person as an observer stops paying attention to distracting him mental and emotional factors and goes beyond the frames imposed by the established system(like a reasonable global organism, noosphere). Someone calls it freedom, someone uses the word Nirvana, or the state of holiness, but the current discoveries in modern physics serve as another proof of this transformation of the human personality and the soul into a qualitatively new mature being!

Observation of the Earth's seismic activity continues, ahead of you is a new collected information base on climate events and unexpected discoveries that were noticed in course of  the experiment. Watch for new climate reviews and cooperate with the site team: [email protected] 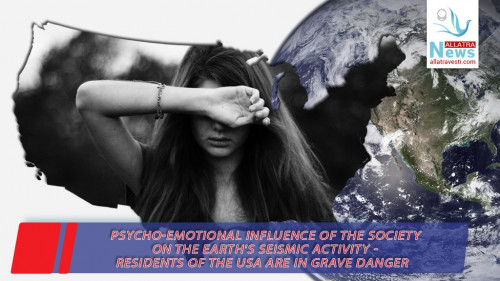 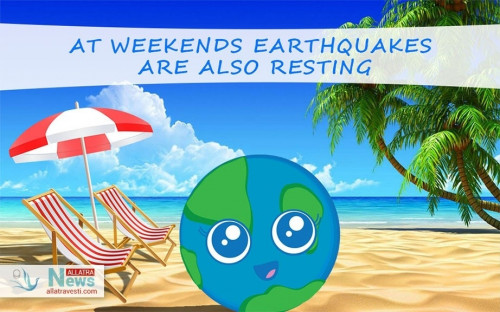 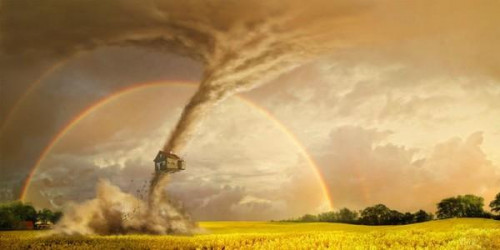 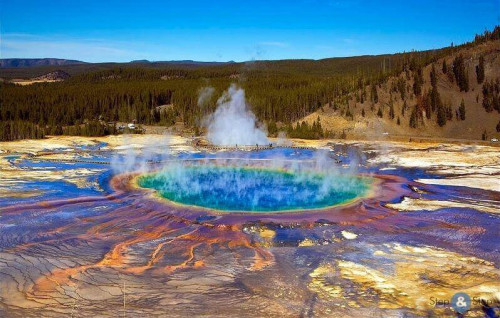 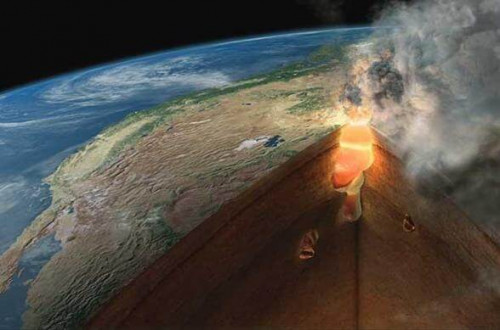 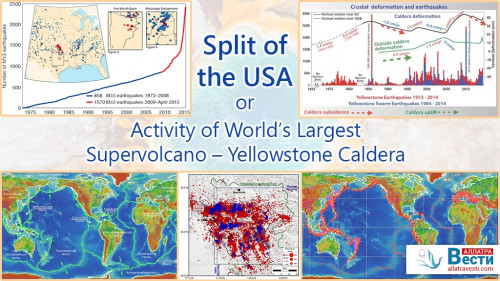 Split of the USA or Activity of...
Ваш комментарий отправлен на модерацию!
Comments (3)